Seth McNeill, a computer science professor at Union College, has an infectious passion for small, unmanned aerial vehicles. And if you ever get the chance to discuss the subject with him, you’re likely to catch drone fever too. Four years ago, he was an engineer with a tool in search of applications, and he found a valuable research opportunity in Nebraska’s rolling cornfields—benefitting both students and farmers.

In 2016, McNeill was able to offer Union students a class in drone piloting thanks to a sponsorship from SaraniaSat, and several of the student pilots were ultimately hired by the company to fly drones and collect data. Colton Baker, a 2018 international rescue and relief graduate, was one of the first students hired for the project.

“We flew the drones to collect data on crop health,” said Baker. “It was an awesome job.” Making sense out of raw data is a key skill in the twenty-first-century workforce, and his time in the cornfields helped launch his career in data modeling. Now working as a management analyst for the Federal Emergency Management Agency (FEMA), he uses his ability to make large data sets tell a coherent story to empower the agency as it makes decisions quickly during disasters and wisely as they rebuild communities.

However, drone piloting was only half of the work for this sponsored project. While out in the fields, students were also tasked with taking soil samples, and later, plant tissue samples from the same locations.

In 2018, McNeill recruited students Sara Beaudoin, Ashley Morrow, and Chad Vietz to help with the next step of the process—analyzing and comparing data to find out how different crop applications affected plant growth. Christina Burden-Page, one of Union’s biology professors, also joined the research team as a mentor and team coordinator for the laboratory work.

Burden-Page loved seeing students learn new skills and abilities in the lab. Through this research, she said students were “developing critical thinking skills, good lab technique, and confidence.” She believes that giving students opportunities to answer real-world questions and offer solutions that will be used in the field is much more rewarding and motivating than regular lab assignments. 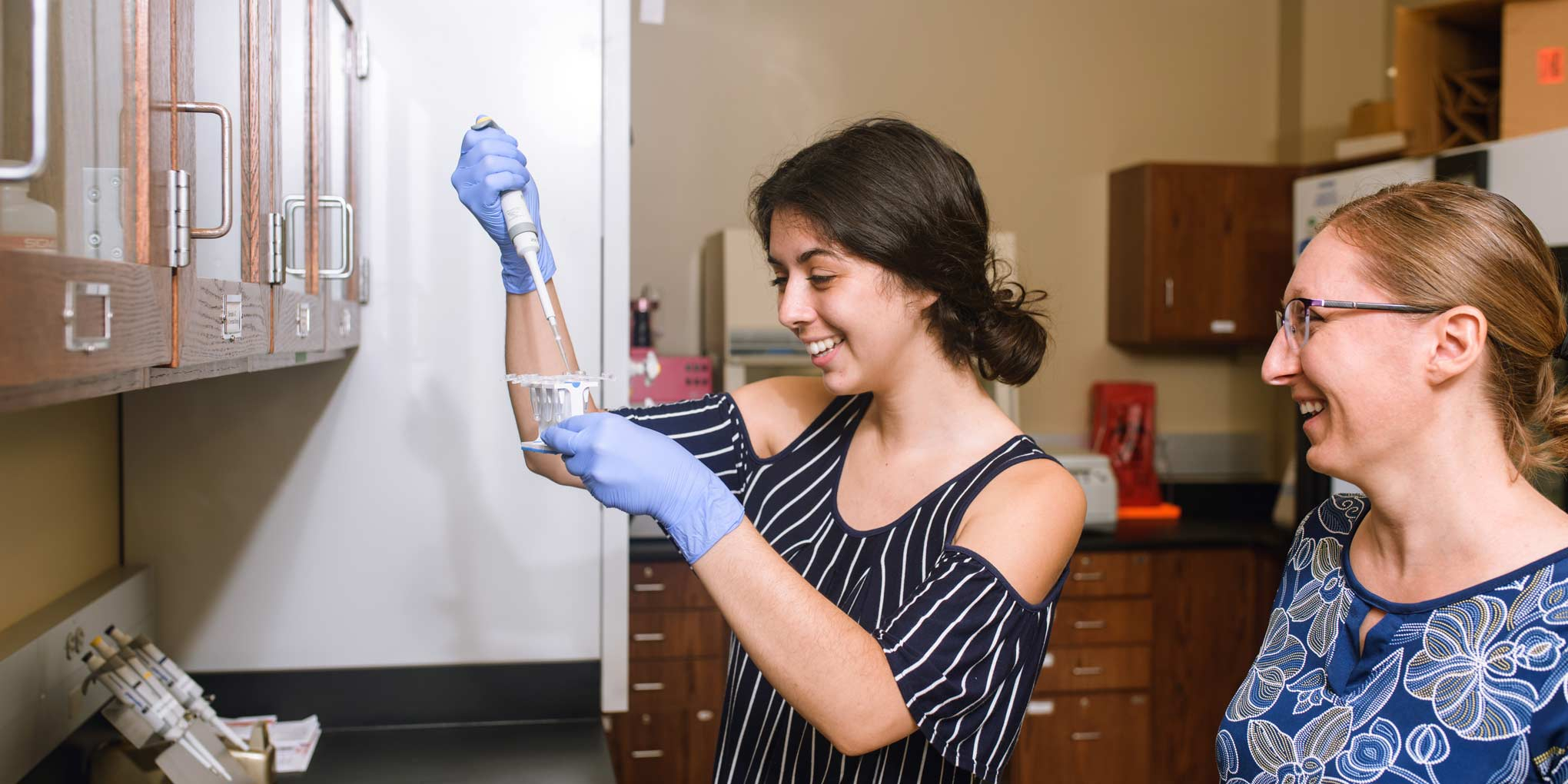 Sara Beaudoin and Dr. Christina Burden-Page in the lab.

Beaudoin, a biomedical science and business administration major, agrees about the importance of real-world research. Her strong relationship with Burden-Page and the need to be competitive for medical-school applications inspired her to join the research team.

“Research like this can lead to new breakthroughs and prepare me for medical school,” she said. “You have to learn to adapt, pay attention to detail and be honest with yourself.”

Chad Vietz, a 2020 chemistry, and biomedical science graduate, also wanted to take advantage of the research opportunity and joined the project in 2018. “I had been looking for a research position since I entered college,” he said. “This opportunity gave me my first taste of research and allowed me to work more independently.”

Vietz worked in a laboratory dedicated solely to the project in Union’s Krueger Center. Extracting and sequencing mRNA in the plant tissue samples, the level of research he was doing is usually reserved for graduate students at most universities. “It was my first time being involved in a research environment and being faced with problems I had to figure out how to solve,” Vietz said. One of the lessons he learned early is there is no place for dawdling in biochemistry. “DNA and RNA are not very stable, meaning that they break down easily. You have to do high quality work quickly.”

A hands-on learner, Vietz said the best part of the research was studying by doing. The laboratory techniques and complex protocol took a lot of time and patience, but because the preparation of the sample had a clear effect on the quality of the data gathered at the end of each sequencing, Vietz could see his attention to detail mattered at every step, every time. “I learned getting great results in research requires a great deal of persistence,” he said. “It can be a lot of work, but I found that it made it all the more rewarding.”

The mRNA extraction protocol took nearly eight hours of precise work per sample. The students started the lengthy process by grinding up a leaf from a cornstalk, separating the contents, incubating samples, and using chemicals to extract the mRNA. Finally, they ended with sequencing the mRNA, the most fascinating step to Vietz. The satisfaction he got from the research confirmed that graduate school and chemistry are the right paths for him.

For an engineer like McNeill, the technology behind the sequencing was the fun part. “The sequencer is a biomembrane⁠—basically a cell wall⁠—attached to electronics which, in turn, attaches to a computer’s USB port,” said McNeill. “Life talking to circuits; it’s a really cool crossover.”

The data collected “provides a snapshot of what is going on in that cell or in that plant at the time of the sample,” explained Burden-Page. “The mRNA is the messenger that tells the cell what new machinery to make. That can change based on what the cell needs to survive and do its job,” she said.

While the research itself is important, McNeill designed the project with student outcomes in mind. “Multi-semester projects have been shown to help students’ educations,” McNeill said, referencing the Gallup-Purdue Index. “Also, the ability to understand and follow a complex protocol over a long period of time is really important for a career in any STEM field.”

According to McNeill, there’s still a fair bit left to be done on this continuing project. Finding and optimizing good systems has been a learning process for both the students and professors. And sometimes setbacks are unavoidable, like when a faulty refrigerator renders samples unusable or a global pandemic breaks up the team. But each complication is also an opportunity for the next group of student researchers to adapt and overcome.

“This hands-on lab work is invaluable for students,” McNeill said. “Whether they are going to grad school or straight into the workforce, it guides them on to even bigger and better horizons.”